Definition of Poetry by Mr Khallas

Hindi poetries are no exception to my belief that while a photo or sketch captures the body of a subject the poetry captures the soul of it. Interestingly enough a poem also becomes the imprint of the mood and the maturity of its creator’s character at that time. It is an enormous source of pleasure for both writer and reader that does not deplete by sharing.

Majority of our poems are in Hindi but they do have influence of Urdu due to the cultural mix we were brought up in. My wife has officially learned Urdu hence she has also written lots of Sher-o-Shayaries especially in her early stages.

My first poetry in Hindi dates back in 1986 but I really enjoyed writing poems in Hindi, Urdu and English mixed language that were extremely casual  in nature when I first discovered  Khallas  in 2013. I still aspire to write a very long Hindi poetry much like my first encounter with the one titled Karn  (Character in Mahabharata – Eldest son of Kunti abandoned at the time of birth), as part of my Intermediate UP Board curriculum. I almost instantly memorized it completely just in first reading!! You will find the glimpse of my aspiration in the poem titled एक कविता का प्रयास. 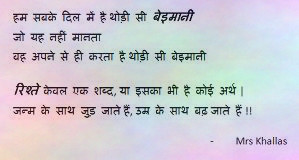 My wife Shalini has been writing poetries both in Urdu and Hindi from a very early age. During a year long dating period I had very tough time decoding her short poetries. My Muslim colleague exploited me as much as he could in return of translation. You may also get a taste of it when you go through her page titled Mrs Khallas

Poetry in Hindi by Tau Ji

My inspiration for writing poetry came from my elder brother Abhay Ji when I was in class eleven. बछिआ के ताऊ (Bachia Ke Tau) page is devoted his great work.

Writing poems has just become a ritual in our family. My son Manu and doughter-in-law Aishwarya have started testing their skills as well.